The Science of Awe 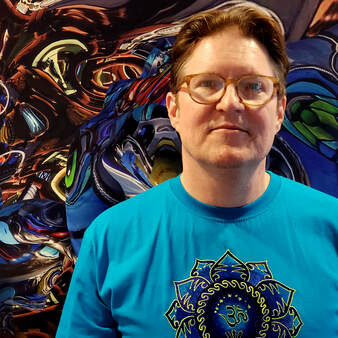 Kevin Mack is a pioneer of immersive art, computer graphics and visual effects. He received the Academy Award for Best Visual Effects for his work on WHAT DREAMS MAY COME (1998).

Mack has been making art with computers for over thirty years. His work is inspired by transcendent visions, natural phenomena, and technology, and is informed by research in a wide range of fields from neuroscience to artificial life.

The son of Disney artists, Mack grew up drawing, painting and sculpting. He attended Art Center College of Design, where he majored in Fine Art, Illustration and Film. After college, Mack supported his experimental art and music working in the film industry as a scenic artist, model maker, sculptor, concept artist, and matte painter for commercials and movies.

In 1986, Mack began exploring the virtual world of computer graphics as an artistic medium. Recognizing the computer’s potential for film work, Mack helped pioneer the use of computer graphics for visual effects and became a creative leader in the development and application of digital art technologies. Mack began using artificial life, rule based systems, and emergence as tools in the creation of virtual art and visual effects.

Mack’s work in artificial life and rule based systems, used to grow the computer generated tree in WHAT DREAMS MAY COME, and inside of a human brain in FIGHT CLUB, inspired the development of tissue simulation software that has been used for virtual stem cell research.

In 2006, Mack received the title of Honorary Neuroscientist from UCLA’s David Geffen School of Medicine for his talks there on perception and visualization. In 2007 he received an honorary Doctorate of Science degree from Art Center College of Design for his contributions to the field of motion picture visual effects. In 2012, Mack worked with physicists at CERN on the visualization of recent discoveries in particle physics.

Among the first to exploit the unique capabilities of 3D printing, Mack creates virtual sculptures that cannot be produced by any other means. Since the arrival of commercial VR headsets in 2014, Mack has focused his efforts on developing and sharing his virtual reality artworks. Mack’s VR experiences are engineered to inspire awe, engage the imagination, and enhance well being, and are being studied and used in therapeutic and medical applications.

Through the MORF Gallery and the ArtStick, Mack is opening windows into his virtual art worlds on Ultra High Definition, High Dynamic Range televisions.

I have an obsessive fascination with the visions, ideas, and processes that inspire my work. The creation of vivid depictions, expressions, and constructions of these imagined and emergent realities is my primary preoccupation in life.

As technology has advanced, so have the ways in which I can share my virtual creations. Digital inkjet printing enabled me to make high quality prints. 3D printing let me bring my virtual art into the physical world. Virtual reality makes it possible to experience my art in its natural habitat. Ultra High Definition, High Dynamic Range televisions provide a window into my art worlds.

Technology provides me with an endless palette of new possibilities and enables me to dissolve traditional boundaries of medium, process, style and genre. My process integrates deliberate design and random happenstance – painting and sculpture – realism and abstraction – nature and technology – art and mathematics – science and mysticism – philosophy and humor.

People often say, “We are only limited by our imagination.” With technology, I’ve found I can create things I could never have imagined. Using directed randomness, procedural rule based systems and artificial life, I can create my own laws of nature and explore what emerges. Discovery and the search for novelty are central to my creative process.

The primary goal of my work is to inspire awe. I explore and study neuroscience in an effort to understand the mechanisms of perception and how art and nature produce the transcendent experience of awe. The understanding I’ve gained from my research has become integral to my work. I’ve developed a variety of artistic techniques to inspire the neurological processes that are fundamental to awe.

In recent years awe has become recognized as a unique emotion. The science of awe has made its way into popular culture through mainstream media. As an artist who’s focused on awe, it’s been exciting to see its incredible benefits identified, verified, and demonstrated by the scientific community. Scientific studies have proven that awe, as experienced through art and nature, has significant mental and physical health benefits. It reduces stress, anxiety and inflammation, and has positive effects on attitude, behavior and well being. Awe inspires accommodation, the re-evaluation and reformation of our models of reality and self, which can bring about lasting positive changes to attitude and personality.